61 million people are right now fleeing from war, persecution and poverty. In vulnerable situations affected by violence and uncertainty, existing power and gender structures are growing stronger. In areas of Lebanon where people who have fled from Syria now live, the situation is getting more and more acute as physical, mental and sexual violence against girls and women are constantly increasing. This is why, Clowns Without Borders Sweden together with Beirut DC and Clown Me In are starting  the two-year project “Creative ArTs for CHange”.

Together, Clowns Without Borders Sweden and Clown Me In (Beirut DC) will train Syrian and Lebanese people with a background in art, culture and social work. They will be given new tools and methods to apply when leading group workshops for Syrian refugees in Lebanon. In these workshops, Syrian girls, women, boys and men, will be invited in separate groups to express themselves in a safe space, to create understanding for others and get psychosocial support through creative art forms. The project is being carried out with financial support from the Swedish development assistance via the Swedish Institute.

“We are living one of the worst and biggest crisis in the world, a project like this one would open a space for us to come together, to listen and to act. The need is big in Lebanon and around the world and we all need to act right now,” says Sabine Choucair, co-founder of Clown Me In at Beirut DC.

“Creative ArTs for CHange” starts in April 2017. The first of two 5-6 weeks’ group leadership trainings take place in August-September, and then the weekly exercises for refugees starts in October 2017. 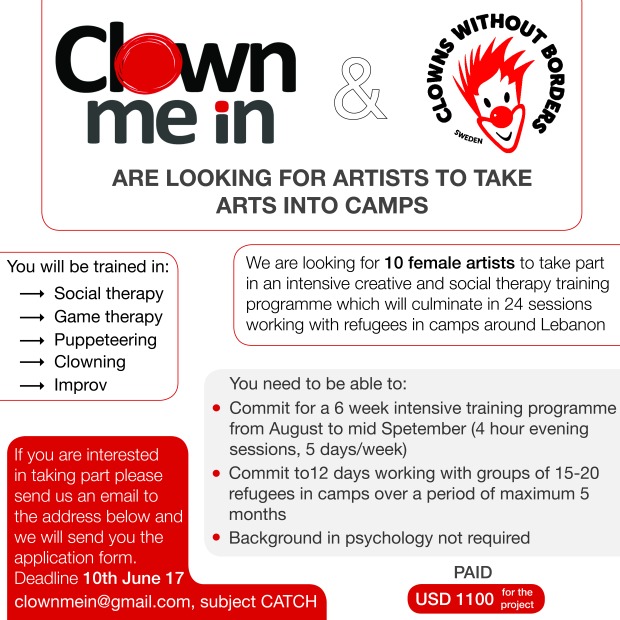