After the explosion that shook Beirut on August 4, six of the clown members of Clown Me In started rehearsing, online first, then in person for a street performance to be presented in the most affected areas in Beirut after feeling the need for joy and laughter.
Read more about the tour here

In April-May 2019, as part of a collaboration with Friends of Kayany Foundation, we did a mini-tour for 5 days, 3 of which where for schools for Syrian refugees in the Bekaa.

For the other two days, we had to do a small fundraiser and collect donations to able to perform for more people. In total, we performed in 11 locations for an audience exceeding 1000 person. 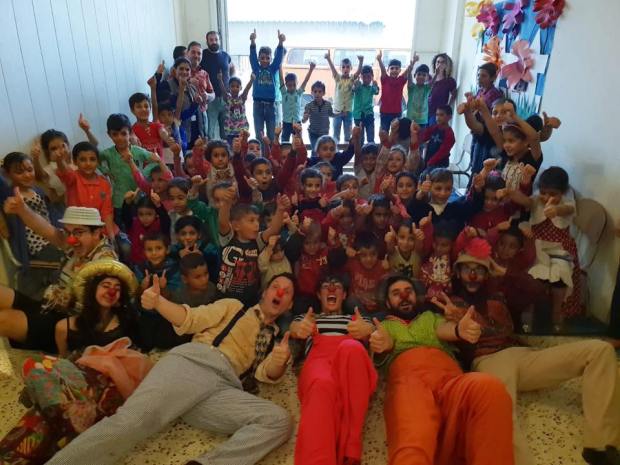 This year Stephen Sobal from All In Theatre joined Sabine Choucair from Clown Me In to train the new clowns and artists of We Must Clown. Clowns from Clown Me In and our new We Must Clown members devised the show together and started touring –from the 24th of October till the 4th of November– the new performance around Lebanon along with Hannah Elisabeth and Brendon Gawel from Clowns Without Borders USA who are also joining this year’s tour.

A big shoutout to all of you around the world who helped us fund this year’s tour and supported us through our yearly crowdfunding campaign.

To know more about this project go here

Our 2017 Clown Tour of Lebanon was a 10-day tour of back to back performances. We would like to take a minute to thank everybody who supported us through our generosity campaign and fundraisers and helped make this tour a reality. We went up and down the country, travelling hundreds of kilometres per day to perform in refugee camps, schools and public spaces spreading laughter and and love where it is most needed.

This tour was very different to our usual tour, along with our regular Clown Me In members (who you can find out more about here) we were joined by new clowns from We Must Clown, the project we launched this summer in collaboration with the Qattan foundation (click here to find out more) and also by Leah and Hannah from Clowns Without Borders USA. The entire show was devised in one week through intensive rehearsal sessions with all the clowns on board.
We included our favourite scenes from our old show but added new scenes tackling issues such as trash, honking, plastic surgery and hygiene.

Read more about the tour here

The Beirut blast on August 4th caused widespread destruction in the city; around 300,000 housing units damages, more than 200 deceased victims, thousands injured, and countless families left with no shelter. Everyone was in a state of shock and couldn’t grasp what happened to our city and its habitants. On the first few weeks, we … END_OF_DOCUMENT_TOKEN_TO_BE_REPLACED